Rideau Canal Hijinks | How Can 12 Grown Men Be That Silly 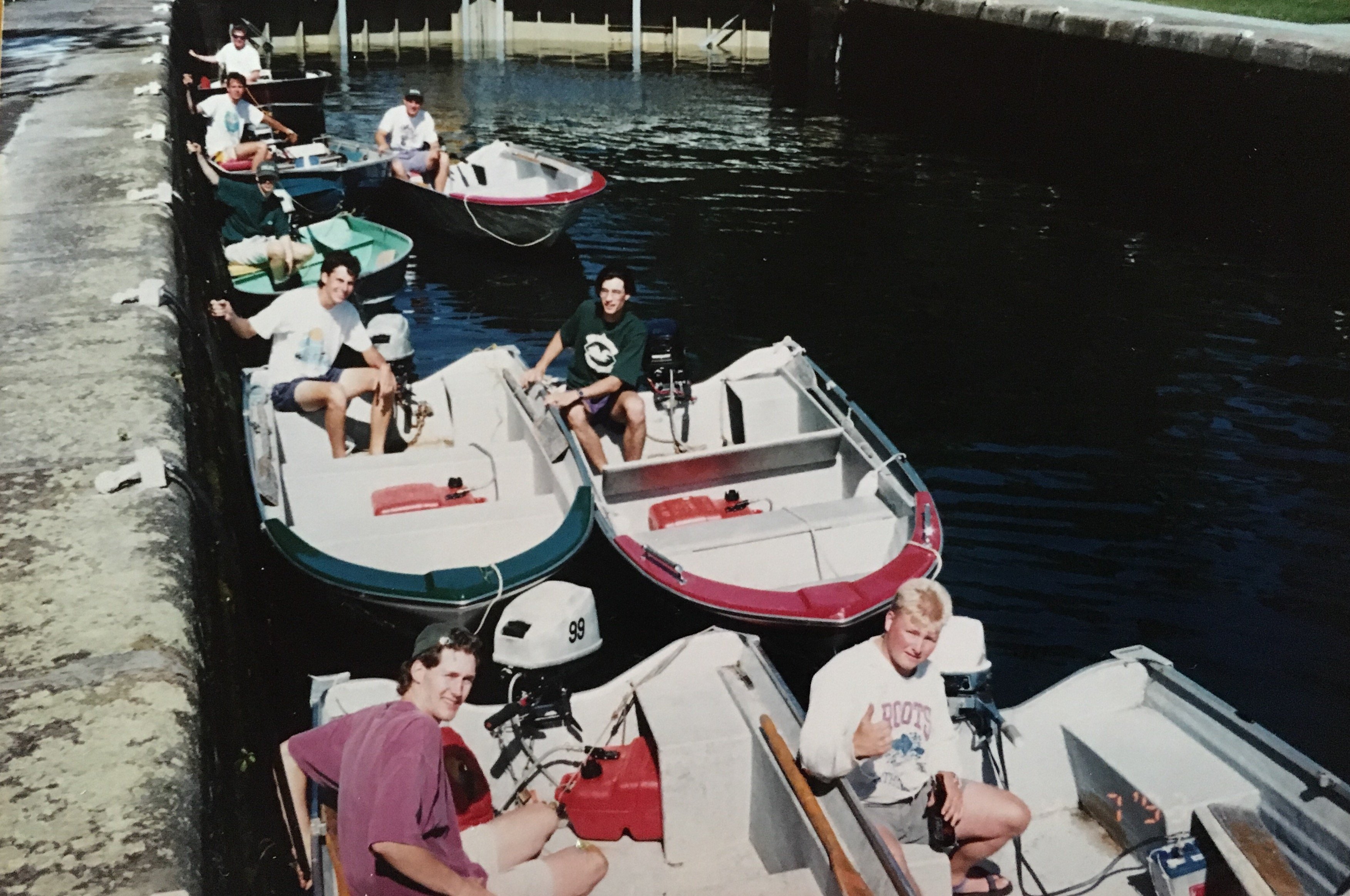 Having been incredibly lucky enough to grow up on Big Rideau Lake, and have both sets of parents and extended family located here, it allowed boating to be part of my life from a very young age. Most of my friends growing up were from Ottawa or Toronto and they had family cottages here. Most of us were allowed to drive small boats from a relatively young age, and we all had different rides and loved getting out on the water.

At the marina (as we do now) we rented small fishing boats. At that time, they were 14' St. Maurice Fibreglass utilities with 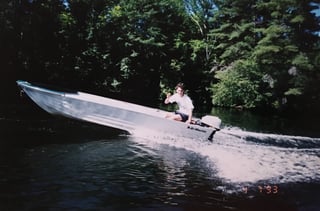 9.9 Mercury 2 Stroke engines. Since a few of my friends had similar boats, in the early 1990s we decided to rent the fleet one day and all "tour" around the lake, together. It became an annual event, and every year we went a little further. First to Perth, then to Chaffey's Lock, etc. Each year going through the Rideau Canal, swimming, going for lunch and/or ice cream.

The fourth year (somewhere around 1996) someone had a bright idea, or so we thought at the time. Steve Hamre had an inflatable zodiac. Many of our customers with cruisers had them on their boats. What if we asked to borrow them for our trip? We rounded up 6 boats as I recall, and there were 12 of us who wanted to go....2 per 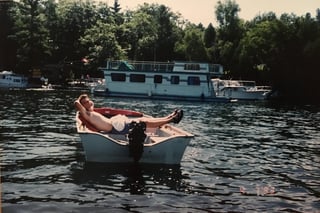 As we talked it through, other ideas came up. "What if we went all the way to Kingston?". "What if we went OVER the locks instead of through them?" "What if we did it AFTER THE LOCKS CLOSED in the evening?" "What if we got our girlfriends to meet us in Kingston with our trucks, and we went out to the bars afterward?". Well, that is exactly what we set out to do!

I carefully organized the fuel and supplies we would need (first aid, flash lights, water, maps) and also planned the timing all through the route and over the 15 locks. I estimated each stretch/lake time, and each portage. Arrival into Kingsto 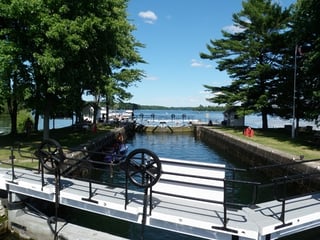 n was targeted for 9:30pm, just as twilight changed to dusk.

At around 4:30pm, we set off from the marina in order to get to Narrows Lock around 5:30, just as the "last lock" gate is closed. We actually waited in the water, and politely declined to go through. Once that happened, off to the right of the locks we went ashore. Much less spectacular than D-Day in France, we stormed the beach. The idea was that with two people, we should be able to carry the dinghies up and over, slide them in the other side, and off we go down the Upper Rideau Lake and onto the next lock we go! Well......they were a LOT heavier that we anticipated. We struggled mightily, and that was the easiest one of the whole trip.

At Newboro, which is a much longer portage, we realized we'd have to help each other out, and carried each dingy with four men. Back and forth we walked twice each. It was still heavy, and the distance and terrain made it tough. We were having a blast though, so onward!

Chaffey's Lock - on time. Davis Lock - on time. Top of Jones Falls - on schedule. OK, how do we get over Jones Falls?! We soon realized that the only viable route was down the service road to the hydro electric generating station around the huge dam. Did you know that when completed, the Dam at Jones Falls, which still stands today, was the largest in North America?! Needless to say, we were slowed down by this obstacle and started to get a bit behind. On top of that, everyone
started to get a bit tired and sore.....keep pushing on. 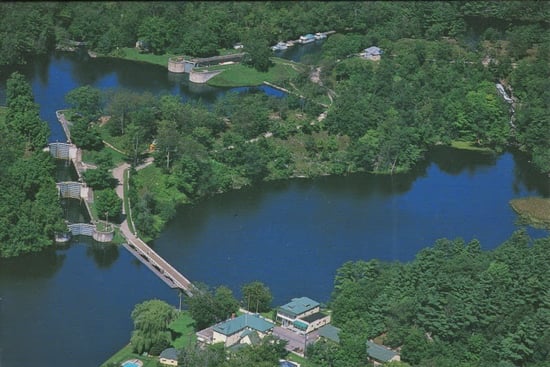 One major miscalculation I made was the distance of between Jones Falls, and Kingston Mills (with the three Brewers Mills Locks in between).The River Styx section behind the Joyceville Penitentiary took a very long time, and we started to lose daylight. This was well before texting or cell phones, so we had no way to let our crew in Kingston know. We had to keep going no matter what.

Kingston Mills is much steeper and rockier than Jones Falls, and with four locks there too, we had to do the same thing and use the service road and walk all the boats around. When we finally got the boats in the water at the bottom, it was 9:45, and we were out of light. On went the flashlights, and navigation became more tricky. Finding markers in the dark in the Cataraqui River, the inner harbour, and onto passing Old Fort Henry was challenging to say the least.

We finally cleared the causeway bridge, and veered to starboard, coming around past the Wolfe Island Ferry, and into the harbour. Our adoring girls were waiting with champagne, trophies, a huge congratulations and a rehearsed cheer. They had been there for a few hours, been to dinner, and had already had a drink without us ;-)

We, however, were exhausted. We were physically and mentally done. Our bodies ached, and all we wanted was our beds. We loaded our dinghies into the back of the trucks, strapped them in, and headed back to Portland.

That was the last time we ever attempted such a stunt. For a good week afterwards we were battered, bruised, and with sore backs; all of us vowed "never again". There was idle passing talk about a similar trip going north to Ottawa, and yet - we were smarted than that. Unfortunately, I cannot find any pictures from that actual trip, although I know there are a few out there. If I find any, I will update the post.

There is a lot of fun to be had right here in our backyard. Get out there, and be adventurous. Maybe not what we did...because it was a bit crazy! These events and other stories of my youth help define who I am, and help me better relate to you and your boating. I AM a boat guy, and have been from day one.  "Cheers" to our shared passion of making memories on the water!